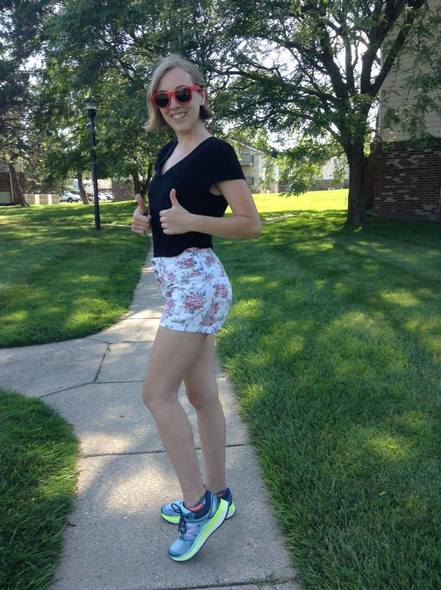 I was diagnosed with Cystic Fibrosis at age 15. I didn't really have many symptoms of CF growing up, at least nothing so out of the ordinary that we would have suspected anything other than me just being naturally thin and having a cough that we attributed to allergies. I was always fairly active; even ran track in 8th grade. But in the months leading up to a diagnosis I started losing weight, coughing so much that my lips/nails turned blue, and in general just feeling awful and not knowing why. I couldn't walk down the hallways at school or go up stairs. It took me three times as long to go anywhere/do anything as it took anyone else. I was going to the doctor, but was continuously told it was asthma. The doctor put me on a couple different inhalers but as my weight dropped to 95 pounds and breathing got worse and worse, it just wasn't cutting it. One day I just had enough of not being able to breathe, so I asked my mom to take me to the ER.

Once in the ER in my hometown, I was put on o2, got blood tests, scans, etc. but they weren't entirely sure what was going on. They put me in an ambulance and transferred me to the children's hospital in Grand Rapids. From there I spent a few more days in suspense - my dad staying with me- waiting to find out what was wrong, until a pediatric CF specialist came to talk to us and ordered a sweat test. I was diagnosed a couple days before Christmas. Of course I was in shock/denial, and yet my body was already feeling so much relief from the medicines that I couldn't help but feel good. For the first time in months, I could breathe. When they did my PFTs though, I only blew a 32. And that was me feeling amazing! I can't imagine what it was when I was so sick. I spent a total of 22 days in the hospital healing, learning about CF, meeting the pediatric CF team, and trying to figure out what this meant for my future. I remember in particular just a couple days after my diagnosis, one nurse said to me "Don't worry, a lot of people  with CF are living into their 40s now!" I know that she meant well but that absolutely shook me to the core. I had never had a number put on my life, and I was only 15. I had plans for college and a career. I refused to believe CF would change any of my plans, and since I've grown older I've tried hard not to let it; although I have had to modify some things and of course I think a little differently about my future than I did pre-diagnosis. My goal is to stay as healthy as I can for as long as I can while I wait for a cure or treatment suitable for my mutations to come down the pipeline. Sometimes focusing on my health means focusing less on other things, and that's just a reality I've had to accept. But I try really hard not to compromise on quality of life...having great experiences with my friends/boyfriend/family is very important to me.

My parents were and are supportive of course but they were dealing with something they could never have imagined at the time we were told I had CF. A second blow came when my brother was diagnosed a few days after me. He didn't have symptoms per se, but the doctors wanted to test him because CF is genetic. He is my only sibling. He's 2 years younger than me.

After that long long stay in the hospital, I continued to heal both mentally and emotionally at home. My brother and I figured out how to work treatments into our lives. Over the next couple years my lung function went back up into the 90s. It has since fallen into the 50s, but I've learned how to listen to my body and when to call the doctor, how to take care of myself, and how to accept that I need to rest. That one is still hard for me sometimes. I don't like to slow down! But I've done well, and I've been lucky that I have the health that I do. I got my MSW at the University of Michigan last August, and I've been working as a Fundraising and Volunteer Specialist at a nonprofit in Lansing since then.
Proudly powered by Weebly